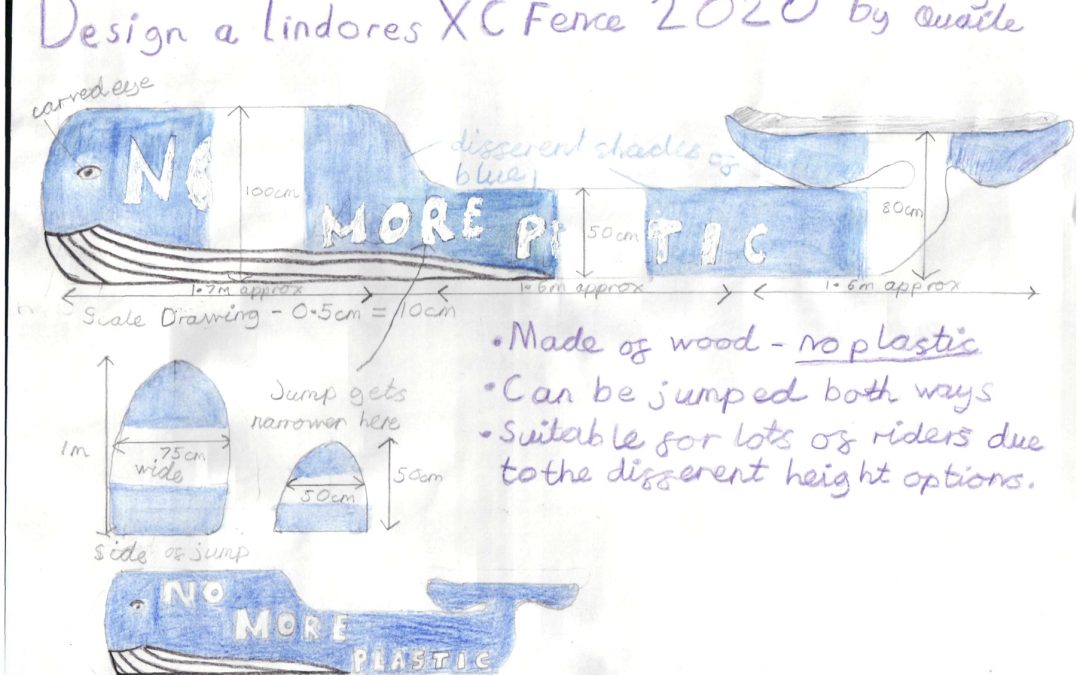 THE WINNER OF THE Congratulations to Polly Quaile aged 14 who is the 2020 winner!

The judges at Lindores Equestrian were overwhelmed with all the design entries for this years competition.  We have to congratulate everyone who made the effort to create and send in such impressive designs.  The standard of concepts are getting better and better every year which is making choosing one winner harder and harder for Lindores Equestrian.

Why did the Whale win?

The judges loved Polly’s design for a number of reasons.  The concept with ‘no more plastic’ grafitti’d on a whale is extremely important message to save the beautiful planet we live in. We’ve never seen a jump design like it and we’re 100% behind what it says!  The design has a very safe and forgiving profile for a training facility like Lindores. The design also has three jumping heights that can be wide enough to comply with British Eventing standards. The whale concept very cleverly allows for the 50cm height to be in the middle which we also loved for training.

Competitions don’t normally tell everyone who came second – but this year we wanted to share a design that gave us the biggest laugh.  We liaised closely with our British Eventing Course Builder on this design but sadly it just didn’t tick as many boxes as The Whale.  So well done to Caroline Wilson and Frances Ferguson with their ‘Brave Pants and Posh Pants’ design.  Inspired by the Equiteam Confidence Camps that are hosted here at Lindores. ‘Brave Pants’ was a strong re-occuring theme that clearly means a lot to many riders. Well done everyone! Polly Quaile the winner of this years competition is a member of Strathblane Pony Club and has a 15.1hh Irish Sportshorse called Noah.  Polly learnt to ride in her local riding school from age 4 but she is also a keen sailor. She often sails with her dad on the west coast.  She said she feels strongly about plastic pollution and she see’s plastic on the beaches and it makes her sad.  At the time of this competition Greta Thunberg was sailing across the Atlantic and after a bit of research Polly realised there was no whale cross country jump in existence. Polly said,

‘I want to make a change and just like Greta I want to raise awareness of plastic pollution.  This idea was a nice way to do it’

When Equestrian Manager Anna Black announced to Polly that she was this years winner Anna asked if there was anything the equestrian industry could do to help tackle plastic pollution and she raised a very clear point. Polly said:

I think it’s the small things, the industry could think about recycling feed tubs and doing their bit.

We both hope that this jump at Lindores Equestrian will help raise awareness and generate idea’s on how the equestrian industry could reduce plastic pollution.

The whale design is incredibly large scale and and it requires a 6metre long tree that is 1 metre wide.  A huge amount of resource and effort was taken to find the perfect tree. The team at Lindores sustainably sourced a tree from the local town, Cupar.  We will be telling the story of the tree and its journey to becoming a whale in future blogs.

The Whale will be carved and painted over the coming weeks by our British Eventing course builder.   We will invite the winner of the competition to open the fence and be the first rider to jump it.  After that, everyone is welcome to jump ‘The Whale’ at Lindores Equestrian training venue in Fife which opens 1st March 2020 and is open 7 days a week during daylight hours.

Until then, stay connected – and think about what you could do to reduce plastic pollution! 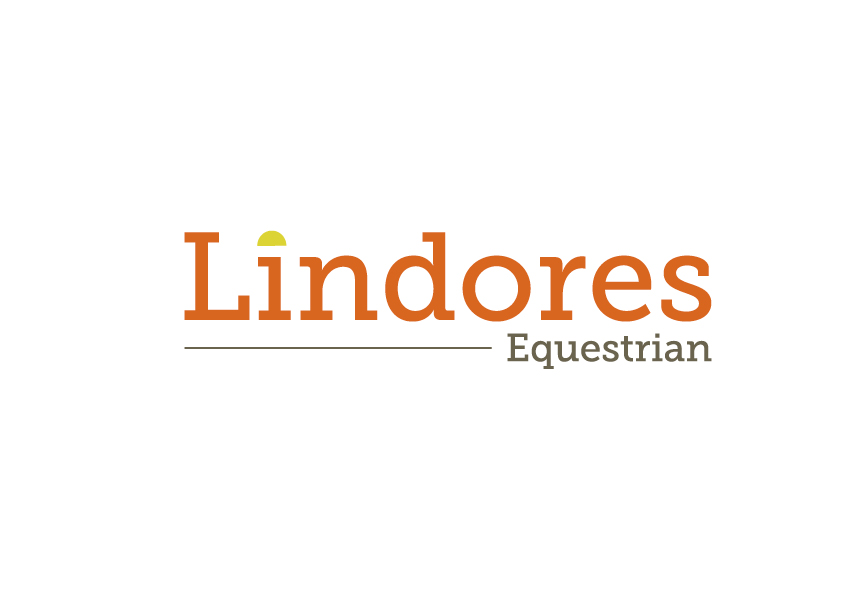 Nominated Equestrian Business of the Year 2018

Lindores Equestrian were humbled to be nominated for the second year running Equestrian Business of the Year 2018 by HorseScotland.

Lindores Equestrian have a huge number of clubs, coaches and performers who use our facilities and we know how deserving many of you are to be nominated. So if you know anyone deserving of a nomination please follow the link and put a big smile on their face.

Last year Lindores were absolutely honoured to have been a runner up in the ‘Equestrian Business of the Year’ award. To be nominated by our customers and to be recognised by horsescotland meant so much to us all of the team.

So we encourage all members of the equestrian community to get involved and nominate who you think has added value!

Who knows who will win at the Awards Ceremony in March at Airth Castle but we’re just delighted to be considered! 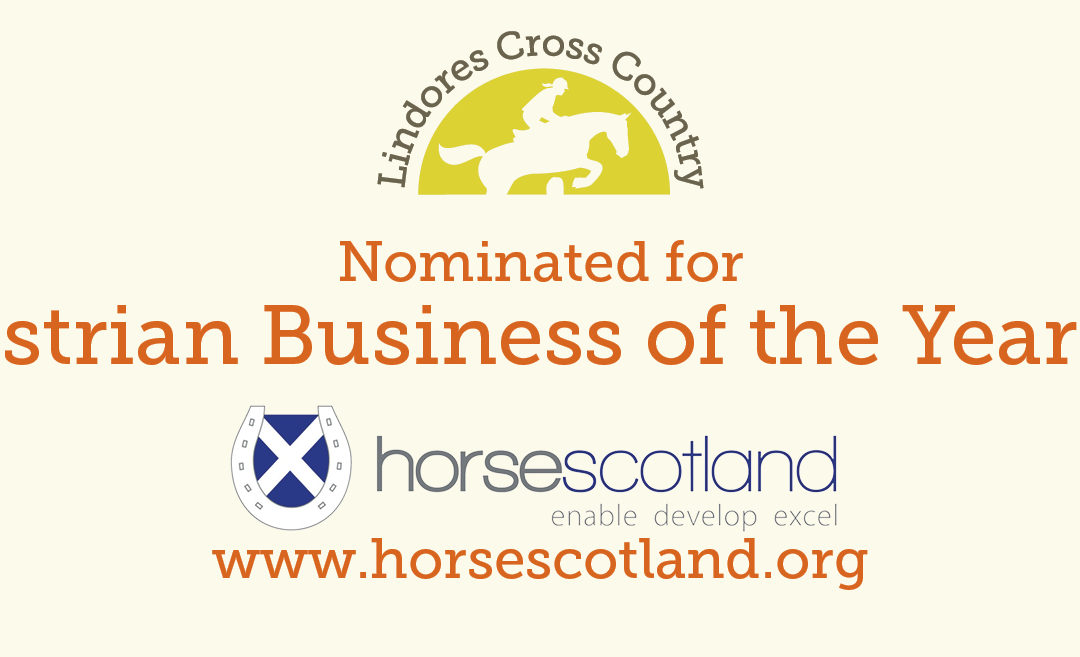 Equestrian Business of the Year 2017 nomination

Lindores Cross Country would like to thank the extremely kind nominees who voted for them in the HorseScotland 2017 Awards. They would also like to thank HorseScotland for accepting the nominations and putting them forward for the award – the team are truly chuffed to bits to be recognised!

HorseScotland are hosting the awards ceremony in Cumbernauld on the 3rd of March and anyone can buy tickets to the event.  The team from Lindores will be there to help cheer on all the different categories and to enjoy an evening with equestrian friends.

We’ll be keeping fingers and hooves crossed on the night of the awards but whatever the result the team at Lindores will still be the same – friendly, approachable and eager to help. 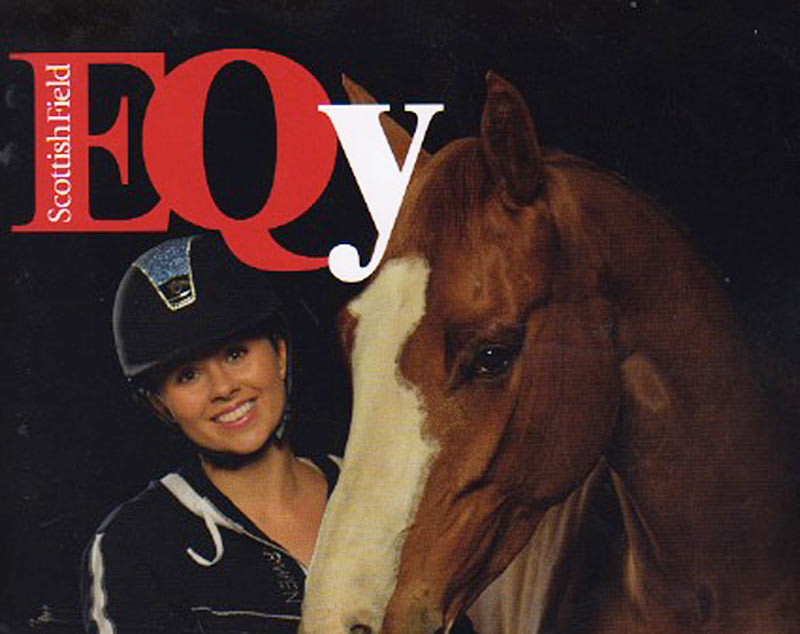 In 2015, Scottish Field EQy Magazine voted Lindores Cross Country the 9th best hack in Scotland.  That’s quite a claim considering the breathtaking landscapes and scenery we have in this fine country of ours.

Hacking is one of the most relaxing past times for both rider and horse and its a great way to capture fresh air, get outdoors and experience some of Scotland.

Scottish Field’s article about the best hacks in Scotland came with a warning that it will have you ‘longing to saddle up and head for the hills, forest and beach’.  Its safe to say it did just that!

Riding clubs, livery yards and private owners of horses that hack have a great advantage in life.  Horses and riders that hack get to see parts of Scotland that are off the beaten track. They witness wildlife that wouldn’t normally be seen and wildlife in its natural habitat.  They bear victim to changes in weather that can often leaving you singing hits from The Sound of Music but alternatively leave you screaming in pain because you’re so numb you can’t feel your jelly legs.

Hacking is a chance to ride with friends and catch up on their news.  It’s a moment in time for ponies to be together because they are ‘best friends’ – according to their riders!  Hacking is almost an untapped relaxation resource.  To all the busy mums and dads and all the kids desperate to compete just remember the value a hack can add in your mental state and connection with the land.

Lindores Lodge Horse Holidays understand the value of a good hack and offer customers hacking off road from the doorstep.  Lindores like anywhere has the good weather, it has the bad weather, it has the muddy puddles and it has the dry scorching summers.  Regardless of the changing elements one thing doesn’t change – and that is the 360 degree views of breathtaking Fife, Angus and Perthshire countryside.  Thank you for the award Scottish Field!